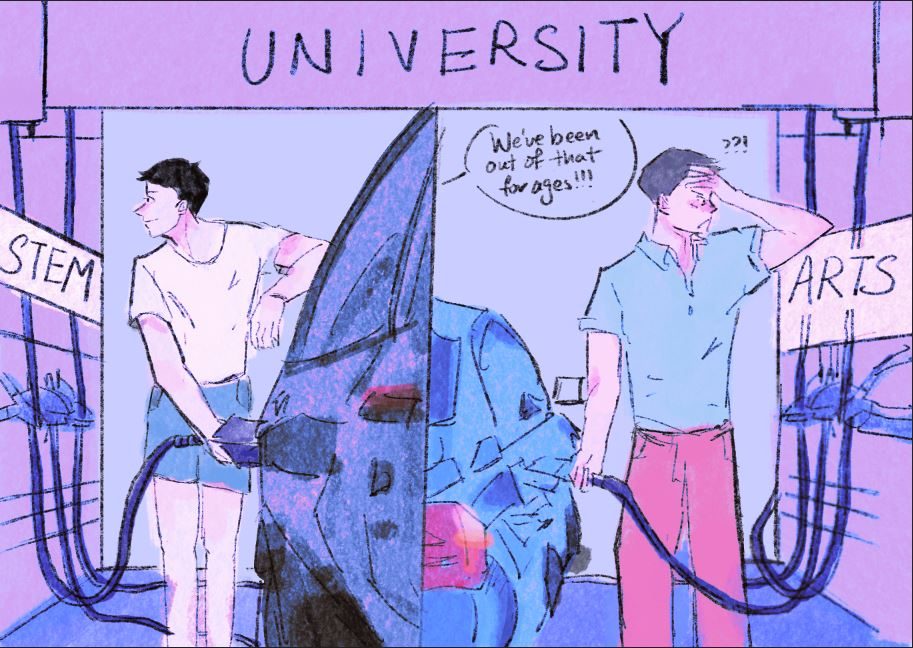 In July 2021, then Education Secretary Gavin Williamson announced 50% funding cuts for art and design degrees. More recently, there has been talk of limiting the number of non-STEM graduate students in an effort to create a high-income, science-oriented workforce. The government has justified these measures by citing the lack of financial return offered by non-STEM courses.

This overly commercial view of the value of a degree and the purpose of a university education has been called “anti-intellectual” by its critics and, in fact, it is an approach that is not only far too simplistic in its definition of “value”, but also inaccurate. Although indeed the arts are not worth as much to the UK financially as science and technology, they still bring in a significant amount of money each year, generating nearly £11billion a year.

However, their real value lies in the cultural capital they produce; cultural capital flowing into a vibrant creative landscape that has consistently produced some of the world’s best music, film and fiction for over half a century.

But it’s not just about having James Bond and JK Rowling to brag about. People don’t get arts degrees because they want a lot of money — they get them because they love them. Keith Chapman, the man who created Bob the Builder and Paw Patrol (both huge financial success), studied graphic design at what was then Great Yarmouth College of Art and Design, now part of Norwich University of the Arts. write in The Times red boxhe credits his degree with giving him and people like him “a sense of personal fulfillment and a chance to do something we love in life.”

Money is not the path to contentment for all of us. For many, like Chapman, the path to happiness instead lies in the freedom of expression and experimentation afforded by time spent studying what they love in college.

It’s just the arts. Social science subjects, economics aside, do not necessarily promise huge financial returns and could also be affected by the reductions in student numbers discussed. That, frankly, sounds crazy, especially considering that 20% of MPs have studied politics, followed by 13% with degrees in history and 12% in law – Gavin Williamson himself studied social science! The 10% economy is the only STEM subject to make the top six, and as has been suggested before, even though it is as much social science as it is STEM. Social sciences and arts subjects like history and English produce graduates whose skills are essential to the effective functioning of a political system as complex and multi-faceted as that of the UK, whether in frontline politics or behind the scenes of the public service.

STEM subjects can never compete with the arts and social sciences in producing critical thinkers who can see the world in less black and white terms and treat that world with a healthy dose of skepticism. STEM degrees also don’t teach the written and verbal communication skills that are so essential in history, English, and philosophy classes. These are all skills that are crucial not just in government, but in fields like journalism, law, and consulting.

We need scientists, but we also need social scientists, artists, historians and writers if we want a healthy and functioning society. SOAS Director Adam Habib embellishes to argue that the social sciences have been more important than the work of natural scientists in the fight against Covid-19, but something of the essence of his argument is certainly valid. From a public health perspective, the arts, humanities, social sciences, and natural sciences must work in tandem to produce a country in which expression is encouraged, political stability and accountability are assured, and the innovation in science and technology thrives. Mental health problems cannot be solved by making everyone a scientist, just as physical health problems cannot be solved by making all of us actors. Privileging one area over another is wrong — balance is what is needed if we are to meet the challenges facing our society.