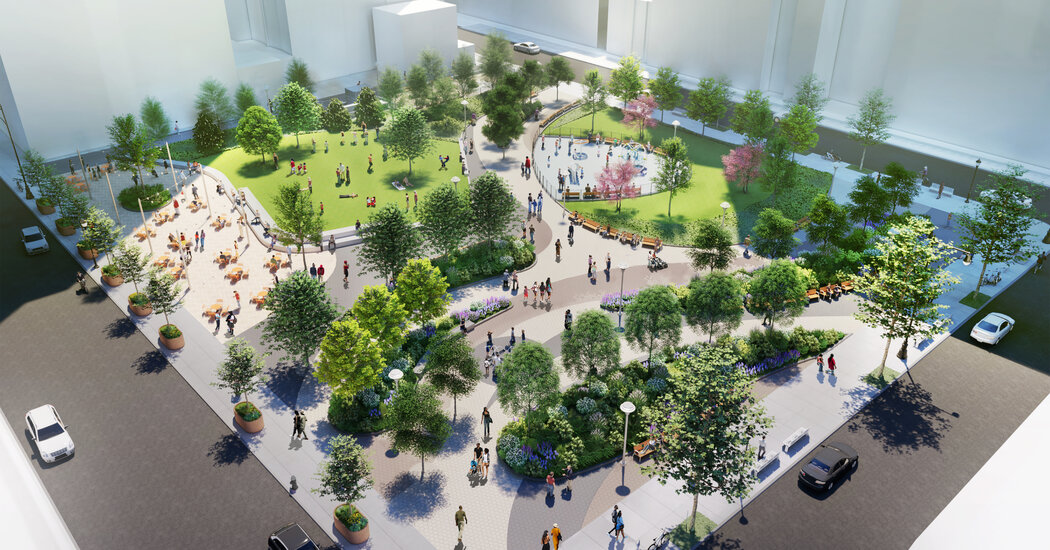 New York City is moving forward with an artwork to celebrate the abolitionist movement that some critics say is too abstract in a city where so few monuments honor black people with figurative sculptures.

The city plan features a design by artist Kameelah Janan Rasheed that incorporates social justice messages into the benches and curbs of a new $15 million park in Brooklyn named Abolitionist Place.

The site belongs to a corner of downtown Brooklyn that adjoins 227 Duffield Street, which was given landmark status last year for its connection to anti-slavery advocates of the 1800s.

The city’s Public Design Commission said it filed the design plan discussion last January, after a group of conservationists and activists said they believed the plan should feature the statuary of abolitionists. But in September, the city said it was moving forward with the design, prompting a legal challenge filed this month by critics who asked a judge to review the city’s approval process.

“We’re frustrated,” said Jacob Morris, the historian challenging the decision of the Public Design Commission, which reviews all permanent monuments on city property. He said the agency violated its own rules by refusing to hear additional public testimony before voting for concept approval of the $689,000 project at a meeting in September.

For several years, Morris and others worked to erect a figurative sculpture called “Sisters in Freedom” at the same location in downtown Brooklyn. It would honor historically significant black women like investigative journalist Ida B. Wells and educator and abolitionist Sarah J. Garnet.

When he was Brooklyn Borough President, New York City Mayor Eric Adams backed the traditional monument that Morris would like to see built. In 2019, Adams penned a letter to city officials saying the artwork would “further elevate these wonderful, empowered women in our consciousness.”

A spokeswoman for the mayor, Amaris Cockfield, did not respond to questions about her position on the decision to carry out a more abstract effort at Abolitionist Place.

City officials said the installation plan for Rasheed’s work is not yet final and announced the artist began hosting online community engagement sessions this week to hear thoughts. on its design. Additionally, the Public Design Commission said it would continue to review the design and solicit public comment.

“We plan to have another public hearing on this when he returns for a preliminary review,” Keri Butler, the agency’s executive director, said by email.

An expert on the city’s public design approval process said she thinks the court challenge to the commission’s approval last fall faces an uphill battle.

A legal challenge to return the monument to open court “seems a little extreme,” said Michele H. Bogart, an art historian who specializes in the city’s public works. “He’s trying to force them to change the way they operate, to make room for more public comment.”

Police Commissioner: Keechant Sewell. The Nassau County Chief of Detectives becomes New York’s first female police commissioner, taking charge of the nation’s largest police force amid a crisis of confidence in American police and a troubling rise in the violence.

Commissioner of the Correctional Department: Louis Molina. The former NYPD officer, who was the head of the Las Vegas Department of Public Safety, is tasked with leading the city’s beleaguered Corrections Department and restoring order to the beleaguered prison complex on Rikers Island.

Senior Advisor: Brendan McGuire. After a stint as a partner at a law firm, the former federal prosecutor is returning to the public sector to advise the mayor on legal matters involving city hall, executive staff and administrative matters.

Shawné Lee, whose family has fought to preserve the neighborhood’s abolitionist history, supports the lawsuit. “I would like to see the Public Design Commission change its process and become more inclusive for the community,” she said. “Art is a form of expression, but do you allow us to express our concerns?”

The park in which the abolitionist work will be presented is piloted by the city’s economic development agency and the design has been approved by the Department of Cultural Affairs.

Rasheed, a former public school teacher whose text banners adorned the facade of the Brooklyn Museum, drafted a project that includes a freestanding sculpture, mosaic reliefs, and messages of social justice spread throughout the park.

“We welcome input from anyone in good faith who wishes to work with their neighbors to create a monument,” Henry added in a statement.

Earlier this week, Rasheed, in one of his online sessions, spoke to the public and explained that community input will determine many essential elements of his installation, such as the texts. “We can only do this if we can respect each other,” she said.

She later sent The New York Times a statement in which she said, “I want to be mindful of creating something that invites conversation, rather than stating historical facts.”

She said Morris and others were misrepresenting her work.

The questions and texts that will be used in the work “are designed to spark discussion,” Rasheed said. “And I’m thrilled that this project is not and never will be the only abolition project in Brooklyn.”